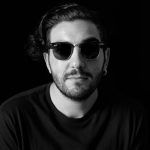 65th release is marked with upbeat and aggressive techno music by Karim Alkhayat who debuts on Plazma with four original track EP called ‘It’s Time’. Ranging from lightweight and trippy ‘Lucid Dream’ to quite rough and clear stated groove, sharp synths. Theme throughout ranges from minimal with sense of melodic and first singer, but background is dark and tense. Other tracks are categorised in techno as they are faster and contain lot of action throughout the song, pressure feeling build-ups and clear destination, such as ‘DNA’ and ‘It’s Time’. This EP has been supported by Kiss FM, Optimuss, Nennat Omen, Joseph Zohlo and much more. Previews built-in for you, but we have it out now available in digital worldwide in shops such as Beatport and listen on Spotify. Our next music therapy with Karim is scheduled 10th of June on Digitally Imported for exclusive guest mix.